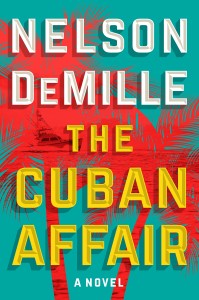 Long Island LitFest Presents a special evening with legendary #1 New York Times best-selling author, Nelson DeMille, at Cinema Arts Centre on Tuesday, October 10th at 7:30 PM as he presents his new book, The Cuban Affair. The event will feature an on-stage conversation between DeMille and Former United States Congressman, Steve Israel. The evening will also include a Q&A and book signing reception. Each ticket holder will receive a copy of The Cuban Affair.

Nelson DeMille is the New York Times bestselling author of twenty novels, six of which were #1 New York Times bestsellers. His novels include The Cuban Affair, Radiant Angel, Plum Island, The Charm School, The Gold Coast, and The General’s Daughter, which was made into a major motion picture, starring John Travolta and Madeleine Stowe. He has written short stories, book reviews, and articles for magazines and newspapers. Nelson DeMille is a combat-decorated U.S. Army veteran, a member of Mensa, Poets & Writers, and the Authors Guild, and a member and past president of the Mystery Writers of America. He is also a member of the International Thriller Writers, who honored him as 2015 ThrillerMaster of the Year. He lives on Long Island with his family.

Former United States Congressman, Steve Israel currently serves as Chairman of the Long Island University Global Institute and a University Writer-In-Residence. Partly based on current events and national news during his tenure in Congress, in 2014 Israel published a critically acclaimed satire of Washington, entitled “The Global War on Morris.” His second novel, “Big Guns,” will be published in 2018 by Simon & Schuster.  Israel was a Member of Congress for sixteen years. President Bill Clinton called him “one of the most thoughtful Members of Congress.” He serves as a regular political commentator on CNN.  Israel graduated from George Washington University with a BA in Political Science. His home is in Oyster Bay, Long Island.

Admission, which includes a copy of the book, must be purchased in advance. Buy tickets here.